BDJs – Starting work on the legs 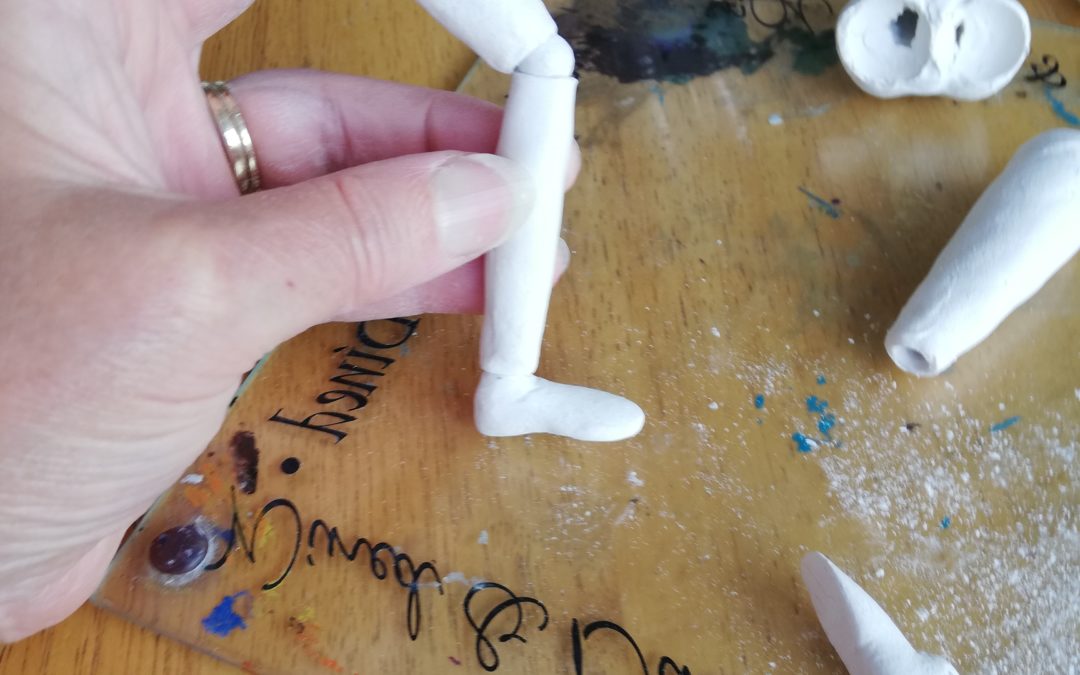 As far as I know Ball Jointed Dolls have two types of joints. If you know more please do let me know. Probably using the name as a clue, you can guess that they both include some sort of ball, and you would be right. Just like our shoulders and hips are ball joints effectively. A ball sits inside a saucer or cup shape and allows a much freer range of movement as it swivels around.

This is a single ball joint effectively; one ball joined to one part and a saucer for it to move around on the other side.

A double ball joint is a separate part altogether made up of two balls. One for each side and saucers sit in the limbs or torso that are to be joined. A picture explains it much better.

I originally planned to use a double joint for the knees and elbows meaning that they would be separate parts, ie upper leg, knee and lower leg. Each end of the knee part would have a ball which would fit into a saucer in the appropriate limb. I quickly decided against it though, deciding that it was too complicated for my first try. So this time round I am gong with the single ball attached to the lower leg and saucer in the upper leg and no extra knee part.

Starting work on the Legs

Sculpting started with making the legs and the arms in a single piece which was then cut in half to make the joints. So far I have made balls of clay of the appropriate size for the knees and hips. These have been attached to the appropriate piece of the body. Meanwhile I have started to sand out the hollows in which the knees will live in the upper legs and the feet will live in the lower legs.

I did somehow run into a slight problem. I seemed to cut the leg too low at the knee joint and when looking at it held together the lower leg looked way out of proportion. This was fixed by cutting of a bit from the upper leg, so she will have slightly shorter legs than originally planned

I have also started the hips area using wooden beads the same size (20mm) as the hip balls so that they should fit together afterwards. I am having to build up slowly while waiting for the clay to air-dry between sculpting, but it is coming along.

I have also made a basic pair of feet. I wanted to play with ‘s-hooks’. S-hooks are used for attaching the hands and feet, catching on to the elastic inside the doll. Additionally, using them also means hands and feet can be changed if desired. I need to find a way of making a hole smaller to fit the wire. Hold on, I may have just thought of one. If I push the wire into place before the clay hardens……. That may just work. I’ll let you know. However, for now, we wait.

‘Till next time, Ally

This site uses Akismet to reduce spam. Learn how your comment data is processed.